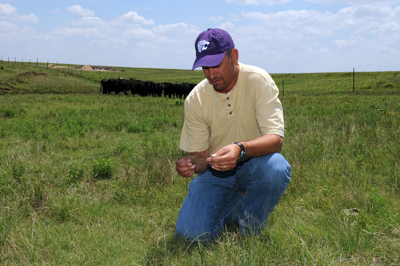 About 7 million hectares (17.5 million acres) in Kansas are rangeland and pastureland. The range research program at Hays focuses primarily on the mid- and shortgrass prairie region, or the western two-thirds of Kansas, which encompasses about 4.8 million hectares (12 million acres). The goal is to develop economically-viable, forage-based, beef-production systems for both cow-calf and stocker operations. Emphasis is on efficient conversion of forages to animal product and the assessment of range response and system sustainability. Energy and protein supplements, and planted forages that complement native range nutritionally, are studied in a systems context. The goal is to maintain diet quantity and quality at a level sufficient to meet cattle maintenance and growth requirements during various production phases and to extend the length of the grazing season. Cattle management alternatives such as varying stocking density and season of use, and land management inputs such as fertilizers, pesticides, and burning, are tested to determine their effect on animal response and range improvement.

Title: An Efficient Stocking Strategy for Grazing Replacement Heifers
Authors: Keith R. Harmoney and John R. Jaeger
Topic: Producers may be looking to increase production efficiency on a shrinking forage land base. The use of intensive early stocking (IES) is one of the most efficient stocking strategies to produce beef on rangeland acres. The IES strategy has been widely used in eastern Kansas and is capable of increasing beef production by 30–40% compared to continuous season long stocking (SLS).

Title: Using Modified Intensive Early Stocking for Cow/Calf Production
Authors: Keith R. Harmoney and John R. Jaeger
Topic: A similar modified IES (MIES) system has increased production efficiency of stocker animals on western Kansas rangelands. Perennial grassland acres for cattle produc­tion, as well as cattle numbers, are declining. Using management practices that mimic the MIES system to increase beef cattle stocking density for breeding herds may allow producers to maintain or increase cow numbers for beef production on fewer peren­nial grassland resources. The objective of this project is to compare cow and calf growth and performance in traditional continuous season-long stocking (SLS) and MIES beef production systems. The objective of this research was to examine the effect of exercise four times daily for the first 14 days after arrival on incidence of BRD and animal growth and performance.

Interseeding Warm-Season Annual Grasses into Perennial Cool-Season Western Wheatgrass Pasture
Rangeland and pasture acres are slowly disappearing due to urbanization and tillage for growing crops. In order to retain cow numbers on a shrinking pasture acreage, increased dry matter production per acre from current pasture is needed to replace the dry matter from lost pasture acres.

Comparing Season-Long Stocking and a Modified Intensive Early Stocking Strategy for Western Kansas
To ensure management flexibility during years of low precipitation, producers should include in their grazing program young stocker animals that can be marketed at any time to enable them to destock and restock rangelands without liquidating their main breeding herd. A modified intensive-early stocking system resulted in greater beef production and greater net returns per acre with less income risk compared to a continuous season-long stocking system.

Grazing Wheat Did Not Reduce Beef Cow Pregnancy
Grazing seeded cool-season cereal grasses can extend the typical native rangeland grazing season and provide a high-quality diet for lactating cows in the early spring. But, lush forage high in protein may decrease fertility because of high blood urea nitrogen content. Beef cows grazing wheat before and during the breeding season showed no signs of lower fertility in this experiment.

Grazing system that has benefitted steers can boost cow-calf operations too
Researchers at the Kansas State University Agricultural Research Center in Hays have found that a grazing system shown to be beneficial for the performance of steers also has great potential for cow-calf producers.

The above stated research has been partially sponsored by the J. H. Baker Trust. 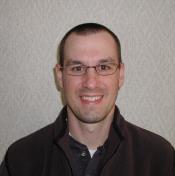