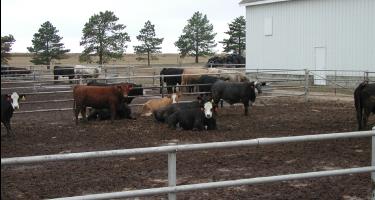 Over half of the 64,000 farms in Kansas raise cattle, with over 5.7 million head marketed annually. In 2003, cash receipts for all Kansas commodities was slightly over 9 billion dollars. Of this, approximately 62% of the total cash receipts in Kansas came from cattle and calves.

Additionally, Kansas producers graze or background about 2.5 to 3.0 million stockers annually. Without question, beef production is the economic workhorse of Kansas agriculture.

Grazing system that has benefitted steers can boost cow-calf operations too
May 6, 2019
Researchers at the Kansas State University Agricultural Research Center in Hays have found that a grazing system shown to be beneficial for the performance of steers also has great potential for cow-calf producers.

Title: An Efficient Stocking Strategy for Grazing Replacement Heifers
Authors: Keith R. Harmoney and John R. Jaeger
Topic: Producers may be looking to increase production efficiency on a shrinking forage land base. The use of intensive early stocking (IES) is one of the most efficient stocking strategies to produce beef on rangeland acres. The IES strategy has been widely used in eastern Kansas and is capable of increasing beef production by 30–40% compared to continuous season long stocking (SLS).

Title: Using Modified Intensive Early Stocking for Cow/Calf Production
Authors: Keith R. Harmoney and John R. Jaeger
Topic: A similar modified IES (MIES) system has increased production efficiency of stocker animals on western Kansas rangelands. Perennial grassland acres for cattle produc­tion, as well as cattle numbers, are declining. Using management practices that mimic the MIES system to increase beef cattle stocking density for breeding herds may allow producers to maintain or increase cow numbers for beef production on fewer peren­nial grassland resources. The objective of this project is to compare cow and calf growth and performance in traditional continuous season-long stocking (SLS) and MIES beef production systems. The objective of this research was to examine the effect of exercise four times daily for the first 14 days after arrival on incidence of BRD and animal growth and performance. 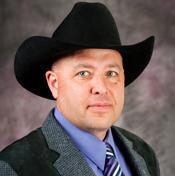 John Jaeger began working at K-State Research and Extension's Agricultural Research Center in Hays on January 1, 2006. He had previously worked at the center from 1986-1994 as a research assistant and cow-calf herdsman.

From 1994 to 2000, he worked as a research assistant and ranch manager at OSU's Eastern Oregon Agricultural Research Center in Union, OR.

He is particularly interested in cow-calf production systems that will result in value-added beef carcasses. Early weaning of calves may be a low-cost sustainable system that will reduce cow maintenance costs as well as improving cow performance and carcass quality of offspring.