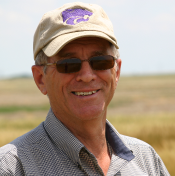 Retired Professor and Research Weed Scientist at the Agricultural Research Center-Hays, Dr. Phil Stahlman recently received two prestigious awards of merit. The first was a 2017 Outstanding Alumnus Award from the College of Agriculture and Natural Resource, University of Wyoming, for outstanding professional contributions to the discipline of Weed Science.  He received the award at a ceremony attended by many faculty, supporters of agriculture from throughout Wyoming, and several former Weed Science colleagues and former KSU administrators during Ag Appreciation Weekend in September 2017.  Stahlman received his Ph.D. in Agronomy (Weed Science emphasis) from University of Wyoming  in 1989.  See http://www.uwyo.edu/uwag/alumni-friends/17-outstanding-alum-stahlman.html.

The second award from the Weed Science Society of America was a 2018 Public Service Award recognizing voluntary service and accomplishments in advancing public understanding of the scientific principles of Weed Science (including but not limited to study of weed, their place in the environment, and means by which they may be controlled or managed). He is only the fourth recipient of this award. He received the award at the annual meeting of the WSSA held in Arlington, VA in February 2018.  His bio, along with those of other award winners, is available at http://wssa.net/wp-content/uploads/2018-WSSA-Awards-Program-Final.pdf.