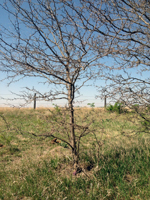 Honey locust (Gleditisia triacanthos L.) is a deciduous tree that produces large brown seed pods and thorny appendages, and is present throughout most of the US. The pods are highly nutritious for livestock and wildlife, and are easily spread by animals in dung pats. Honey locust is typically found in greatest concentrations in the central US in the same general range as historical tallgrass prairie.  Fire suppression and introduction of honey locust into shelter belts has allowed honey locust to increase into more arid regions associated with mixed grass prairie.  The increase in population has especially occurred along drainages and low lying areas in pasture, but has also spread into upland areas.  Dense stands of honey locust limit grass production, and if damaged or cut, honey locust is capable of producing large quantities of new sprouts from buds around the base of the trunk and along the lengths of the root system.  Because of the propensity to produce sprouts, mechanical control measures also require herbicides to effectively result in tree death.  Several herbicides have been labeled for honey locust control through various application techniques, including basal bark, thin line basal bark, cut stump, frill or girdle, and foliar applications.

We recently performed a test of different techniques and herbicides to control honey locust on grazed pasture.   We targeted trees 3-8” in diameter, and each year for two years we treated trees with one of five combinations of herbicides and application methods.  Treatment combinations included 1) triclopyr 25% + diesel 75% and 2) aminopyralid 5% + bark oil 95%, both applied to the lower 15” of basal bark including the root collar area before reaching the point of runoff, as well as 3) triclopyr 25% + diesel 75%, 4) aminopyralid 10% + water 90%, and 5) dicamba 33% + 2,4-D 2% + water 65%, all applied to wet the outer cambium layer of cut stump surfaces before reaching the point of runoff.  Additionally, the triclopyr + diesel cut stump treatment wetted the entire remaining trunk and root collar area before reaching the point of runoff, as per label instructions.  Basal bark treatments were applied to standing live trees, while cut stump treatments were applied immediately to the surfaces of freshly cut stumps. Trees treated with basal bark application were evaluated for signs of green leaves the following year, and trees treated with basal bark application and trees treated with cut stump application were evaluated the following year for the presence of new sprouts within 6 feet of the tree.

One year after treatment, aminopyralid applied as a basal bark or as a cut stump treatment had the best control and averaged over 97% dead trees with no green leaves or new sprouts.  The dicamba + 2,4-D cut stump treatment also had near 85% control.  The triclopyr + diesel applied on the basal bark controlled nearly 80% of the trees.  The triclopyr + diesel cut stump treatment had fewer dead trees (just over 50%) than any other treatment and produced the most new sprouts.  If cutting down honey locust trees on grazed pasture, treating cut tree surfaces with aminopyralid mixed with water is an excellent option, while treating live standing trees with a basal bark application of aminopyralid and oil is another excellent option.  If using triclopyr and diesel, it is best to use that mixture on live standing trees with a basal bark treatment.  Aminopyralid is a water based herbicide, so oil carriers should have emulsifiers to keep the herbicide in solution for basal bark application, and both should be mixed and tested for compatibility before use.

About 7 million hectares (17.5 million acres) in Kansas are rangeland and pastureland. The range research program at Hays focuses primarily on the mid- and shortgrass prairie region, or the western two-thirds of Kansas, which encompasses about 4.8 million hectares (12 million acres). The goal is to develop economically-viable, forage-based, beef-production systems for both cow-calf and stocker operations. Emphasis is on efficient conversion of forages to animal product and the assessment of range response and system sustainability. Energy and protein supplements, and planted forages that complement native range nutritionally, are studied in a systems context. The goal is to maintain diet quantity and quality at a level sufficient to meet cattle maintenance and growth requirements during various production phases and to extend the length of the grazing season. Cattle management alternatives such as varying stocking density and season of use, and land management inputs such as fertilizers, pesticides, and burning, are tested to determine their effect on animal response and range improvement.